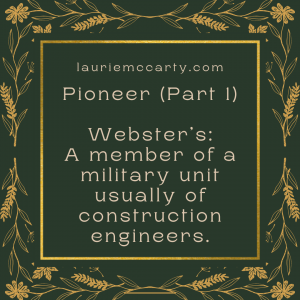 A trusted ministry friend recently called me a pioneer.  I hadn’t realized that over time, team ministry had helped advance the kingdom of God.  25 years ago, not many women had been able to join the team.  Things are changing in that realm, so I guess the word “pioneer” is not so far off.

My trusty online Merriam-Webster dictionary showed me one definition:  “A member for a military unit usually of construction engineers.”  Pioneers build – and build with a plan.  The military aspect of this word tends toward organization, focus, advancement, and protection.  Perhaps methodical construction is what’s happening as we work together, and as we reflect Jesus and His kingdom for the greater good.

Can we really take credit, though, for who God is, what He is doing, and what He has always done?  Jesus may be considered the original team pioneer with the Father and the Spirit!  Take a look:

“Then God said, “Let Us make man in Our image, according to Our likeness; and let them rule over the fish of the sea and over the birds of the sky and over the cattle and over all the earth, and over every creeping thing that creeps on the earth.”  God created man in His own image, in the image of God He created him; male and female He created them.” (Genesis 1:26-27)

God is ever-creative and ever-creating.  He hasn’t stopped.  The Father, Son, and Spirit have made us in their likeness.  They were all there, creating together.  The apostle John, through revelation, has given us more details about Jesus’s role in creating as the living Word of God:

To tell you the truth, there are some parts of being a pioneer that are intimidating, or vague, or even discouraging.  One Scripture verse that helps keep us determined and focused is this:  “And the Lord, He is the One who goes before you.  He will be with you, He will not leave you nor forsake you; do not fear nor be dismayed.”  (Deuteronomy 31:8)

Do you know what that means?  God has already gone before us wherever we go!  There is no place that He has not already been.  Not only is the most creative creator leading the way for us as we pioneer into new things, but He is also the Lord of hosts, the commander and chief of the armies of God.  So as we are led by Him, the kingdom building continues.  And indeed, His plan and protection are with us.  Be encouraged as you move forward in whatever is before you.  He’s the Pioneer that has gone before you and has made a way.