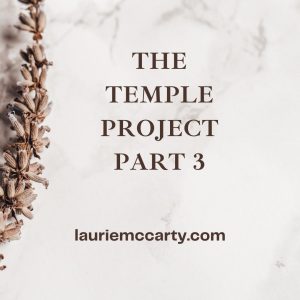 Welcome back!  So far, we’ve determined that you and I are temples of God.  We are God-created humans with the capacity to carry His presence.  We’ve also determined that all together, we are the church, the temple of God.  We carry the presence and blessings of God in a corporate way.

The Need for Cleansing

What happens, though, when things don’t remain holy on the inside of individuals and on the inside of the church at large?  As you might suspect, Jesus always has a plan.  He gives us a glimpse of His heart and His intentions for us and our holiness as we walk through this life as individual temples and as the church:

“Now the Passover of the Jews was approaching, so Jesus went up to Jerusalem.  And in the temple (enclosure) He found the people who were selling oxen and sheep and doves, and the money changers sitting at their tables.

He made a whip of cords, and drove them all out of the temple, with the sheep and the oxen; and He scattered the coins of the money changers and overturned their tables; then to those who sold the doves He said, “Take these things away!  Stop making My Father’s house a place of commerce!”  His disciples remembered that it is written (in the Scriptures), “Zeal (love, concern) for Your house (and its honor) will consume Me.”

But He was speaking of the temple which was His body.  So when he had risen from the dead, His disciples remembered what He had said.  And they believed and trusted in and relied on the Scripture and the words that Jesus had spoken.”  (John 2:13-22)

Father, Son, and Spirit Together in Purpose

We see the Father, Son, and Holy Spirit working in concert in these moments to fulfill the purposes of God on the earth.  The Father had planned this moment since the beginning of time.  Jesus knew (and knows) the intentions of every heart.  He functions in the Holy Spirit without measure, and knows all things.  (See John 3:34)

One purpose in cleansing the temple was to keep the temple holy in the power and passion of the Lord and His Scriptures.   What He saw was the holy temple of God was being used as a marketplace to make profit.  People were dishonestly making money off money changing.  Animals were in the temple area instead of outside the grounds.  Let’s realize, where there are animals, there is smell, chaos, and noise.  Sellers were using the temple as a “short cut” to get where they wanted to go.  The disrespect, the greed, and the callousness of it all woke up the zeal of the Lord.

Another purpose was to convict the wrongdoers of sin.  He made a powerful display of the Did Jesus have a tantrum?  I think not, according to the clues in the Scriptures.  He wove a whip made of cords, quietly, and with a sense of perfect timing. Jesus was filled with all the gifts and fruit of the Spirit. The Spirit’s job includes convicting the world of sin (See John 16:8-9).  This was a zealous, righteous controlled cleansing of His Father’s house.  It was not a tantrum.  It was done in accordance with His Father’s will, as Jesus only did what He saw His Father doing. (See John 5:19)  It was part of Him making things right in that environment.  Can you picture coins scattering everywhere for the poor and previously cheated customers to claim.  Isn’t that just like God to repay people for the injustices they experienced?

Lastly, as Jesus drew people to Himself as the Savior and Redeemer of their souls, He was displaying his perfect balance of grace and truth.  He is full of grace, and full of truth.  He wants all people to be holy as He is holy (See 1 Peter 1:16).  He still draws us today (See John 12:32) and wishes for each of us to follow Him and His ways of love, righteousness and holiness.

The Throne of Grace

The reality is, we cannot cleanse ourselves.  We can repent and confess our sins before the Lord, with faith that He will do the cleansing.  He is the only sinless one with the right and the authority to do so.  He allowed His human temple to be destroyed so He could destroy the power of death and sin in our lives.  His sacrifice gives us all hope for a life of forgiveness, cleansing and freedom.  “For we do not have a high priest who cannot sympathize with our weaknesses, but One who has been tempted in all things as we are, yet without sin.  Therefore let us draw near with confidence to the throne of grace, so that we may receive mercy and find grace to help in time of need.”  (Hebrews 4:15-16)

Jesus still calls us to come with confidence to that throne of grace.  We are invited to examine our hearts often.  The conviction from the Holy Spirit draws us to that place of repentance, mercy, and grace.  I urge you to rest in His presence and allow Him to show you, to lead you, and to cleanse your temple.  All He does for you is in love.  The discomfort of momentary conviction is worth the peace and freedom of living in a clean temple.  Blessings to you as you enjoy His freedom!