The Temple Project Part 4 – The Holy Spirit Fills the Temple 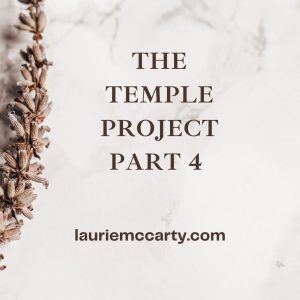 Since the beginning of time, the Holy Spirit has brought creativity, order, and power!  As the third Person of the Trinity, He is God the Holy Spirit, along with God the Father and God the Son.  He is not less-than.  He works in conjunction with the Father and Son to bring about the will of God.

He hovered over the unformed creation in Genesis 1:2.  All through the Old Testament books, the Holy Spirit “came upon” prophets and kings to deliver words of power to God’s people.  He inspired the writing of the Word of God through the centuries.  As God, He knows the deepest things about God:  “Yet to us God has unveiled and revealed them (the things God has prepared for us) by and through His Spirit, for the Holy Spirit searches diligently, exploring and examining everything, even sounding the profound and bottomless things of God (the divine counsels and things hidden and beyond man’s scrutiny), for what person perceives (knows and understands) what passes through a man’s thoughts except the man’s own spirit within him?  Just so no one discerns (comes to know and comprehend) the thoughts of God except the Spirit of God.”  (1 Corinthians 2:10-11)

As King Solomon built a temple to worship God, he carefully obeyed God’s instructions.  As he had the ark of God brought in, he welcomed God’s presence:  “There was nothing in the ark except the two tablets of stone which Moses put there at Horeb, where the Lord made a covenant with the sons of Israel, when they came out of the land of Egypt.  It happened that when the priests came from the holy place, the cloud filled the house of the Lord, so that the priests could not stand to minister because of the cloud, for the glory of the Lord filled the house of the Lord.”  (1 Kings 8:9-11)

God responds to worship and unity in Solomon’s temple by again bringing His Presence:  “When the priests came forth from the holy pace and all the Levitical singers, Asaph, Heman, Jeduthun, and their sons and kinsmen, clothed in fine linen, with cymbals, harps and lyres, standing east of the altar, and with them one hundred and twenty priests blowing trumpets in unison when the trumpeters and the singers were to make themselves heard with one voice to praise and to glorify the Lord, and when they lifted up their voice accompanied by trumpets and cymbals and instruments of music, and when they praised the Lord, saying, “He indeed is good for His lovingkindness is everlasting,” then the house, the house of the Lord, was filled with a cloud, so that the priests could not stand to minister because of the cloud, for the glory of the Lord filled the house of God.”  (2 Chronicles 5:11-14)

Jesus came to bring a New Covenant, a further blessing to God’s people.  He would be our perfect Sacrifice, and our faith in Him and His saving grace would bring us into an eternal relationship with Him.  He promised His disciples that when He left the earth in bodily form, He would send One just like Him, just as the Father had promised:  “I will ask the Father, and He will give you another Helper, that He may be with you forever, that is the Spirit of Truth, whom the world cannot receive, because it does not see Him or know Him, but you know Him because he abides with you and will be in you.  I will not leave you as orphans; I will come to you.”  (John 14:16-18)

Here’s where things change…the Holy Spirit would now be IN the believer instead of UPON the believer at certain times.  The evening of His resurrection, He breathed on them and said, “Receive the Holy Spirit.”  (John 20:22)  He told them to wait in Jerusalem until they with clothed with power from on high.  (Luke 24:49)

As they prayed and waited, God sent the Holy Spirit to fill the believers.  “And when the day of Pentecost had fully come, they were all assembled together in one place, when suddenly, there came a sound from heaven like the rushing of a violent tempest blast, and it filled the whole house in which they were sitting.  and there appeared to them tongues resembling fire, which were separated and distributed and which settled on each one of them.  And they were all filled (diffused throughout their souls) with the Holy Spirit and began to speak in other languages (tongues) as the Spirit kept giving them clear and loud expression (in each tongue in appropriate words.”

Peter proclaimed, “This is the beginning of what was spoken through the prophet Joel:  “And it shall come to pass in the last days, God declares, that I will pour out of My Spirit upon all mankind, and your sons and your daughters shall prophesy, and your young men shall see visions, and your old men shall dream (divinely suggested) dreams.  Yes, and on My menservants also and on My maidservants in those days I will pour out of My Spirit, and they shall prophesy (telling forth the divine counsels and predicting future events pertaining especially to God’s kingdom.” ” (Acts 2:1-4, 16-18)

This power from the Holy Spirit is available to every believer.  We have the blessing of having access to God from the inside of us as well as from all around us.  He will fill, empower, embolden, correct, inspire, teach, train, and lead every believer.  He will gift you with spiritual gifts as He sees fit to build up, encourage, and comfort others.  (See 1 Corinthians 12 and 14.)  He will develop good fruit in you.  (See Galatians 5:22-23.)  He wants to give you what you need to expand the the kingdom of God on earth.  He will teach you what the Word of God means.  You will hear the still, small voice of God in your spirit.  You are never alone when you are filled with God! We can live a life on this earth and forever with Him.

If you have questions about anything you’ve read in The Temple Project, feel free to message me!  I would love to listen, understand, and help!  Blessings to you.