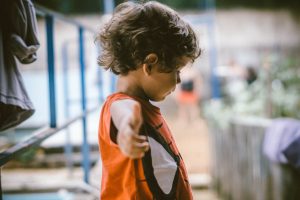 God has always sought out children and those with childlike humility.  The more we realize He’s God and we’re not, the easier it is to posture ourselves to hear from Him.  With that heart attitude, we’re open to what He has to say.

The child Samuel in the Bible heard from God at a young age, before he even knew who the Lord was.  “Now the boy Samuel was ministering to the Lord before Eli.  And word from the Lord was rare in those days, visions were infrequent.  It happened at that time as Eli was lying down in his place, and the lamp of God had not yet gone out, and Samuel was lying down in the temple of the Lord where the ark of God was, that the Lord called Samuel; and he said, “Here I am.”

Not only does the Lord speak to him a strong message, but He came and stood near Samuel.  God’s presence was with him.  It later says in 1 Samuel 3:19:  “Thus Samuel grew and the Lord was with him and let none of his words fail.”

You don’t have to be a child to have a childlike heart before God.  We see Jacob at age 130 in Genesis 46:2-3 when he is afraid to leave his home to join Joseph in Egypt:  “God spoke to Israel in visions of the night and said, “Jacob, Jacob!”  And he said, “Here I am.”  He said, “I am God, the God of your father; do not be afraid to go down to Egypt, for I will make you a great nation there.”  Wow!  God used the childhood name of Israel by calling him Jacob, and He got the humble, childlike answer, “Here I am.”  You’re never too old to be a child before God.

Jesus reinforced this in Matthew 18:2-4 when: “He called a little child and set him before them, and said, “I assure you and most solemnly say to you, unless you repent (that is, change your inner self–your old way of thinking, live changed lives) and become like children (trusting, humble, and forgiving), you will never enter the kingdom of heaven.  Therefore, whoever humbles himself like this child is greatest in the kingdom of heaven.””

In these turbulent times, we look to God for wisdom and direction.  We look for answers and peace.  The best thing we could ever do is take that posture of a humble child and seek God.  He is faithful to hear, and He is faithful to answer in His own way and timing.  He is always good, and He waits for our humble response, “Here I am.”